It was the first time that I attended RampUp!  It was a fantastic event with high caliber speakers including VP and C-level execs from Google, Twitter, Rocketfuel, Criteo, Acxiom, Experian, Adroll, Adobe, Bluekai, Pubmatic and others. Sessions that I attended were dominated by themes related to programmatic media buying, the impact of mobile, how cookies are defined in a post cookie world and data-driven marketing decisions, all which underscored several trends happening in the mobile and marketing space.

On the topic of attribution, one company that was not mentioned that is a leader in the attribution space is HasOffers.

HasOffers is a company that I have a tremendous amount of respect for and I have been tracking their progress since they were founded in 2009. This Seattle-based performance marketing-attribution company has been the lingua franca for tracking advertising campaigns in traditional environments as well as for the white-hot mobile market.

I've gotten to know many of the members of the including their CEO, Peter Hamilton. Peter was gracious enough to speak at ClickBank's recent conference, ClickBank Exchange in January, where I had the opportunity to catch up with him on HasOffers. 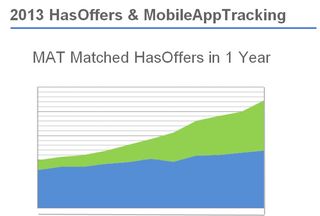 Talking with Peter, I’m convinced that HasOffers is at the heart of the conversation around marketing attribution, and deserve much more credit for their leadership in this space. They are disruptive, pushing forward new advancements, which has even resulted in a public spout with Facebook. But I trust they will sail thru these rough waters as they’ve done in the past.

I believe that there will be continued challenges by these large marketing platforms.  It will be interesting to see if Apple adds attribution via their iAD ad platform as recently uncovered by TechCrunch.  But, the reality to attribution is that it’s important to all digital marketers ,and needs to be consumer-centric tapping several different platforms rather than just one.  This recent post from PandoDaily also reinforces the importance of cross platform attribution.

If HasOffers can crack the code on cross-platform marketing attribution, then I predict they will be one of the largest exits in the ad space coming out of Seattle.