Will YouTube-Based Networks Ever Become Next Generation Broadcast Networks?

Many years ago, I was a founding executive at a company called AtomFilms.  It was the brainchild of Mika Salmi and was sold to Viacom much later in its startup life.  Atom was really before its time.  The company was founded on the principles that entertainment was going to flourish from a new cadre of content creators across a wide variety of screens.  Atom was transmedia (TV, PC, tablet, mobile, wearable) before anyone knew what the hell it meant.  We were acquiring rights from live action films, to animated cartoons with the assumption that short format content was going to rule the day as screens become smaller and more Internet connected.  This was the late ‘90s folks, and consumers were still accessing the Internet over 56K modems.  There was no Wi-Fi.

We ended up discovering new forms of Web entertainment from now famous live action directors to animators.  For example, JibJab was a great partner of ours that we helped grow from its early roots.  A great post on that here.  In fact, we basically invented viral videos and were sort of YouTube before YouTube.

I don't want to sound like the old man of the Internet (well, I am) but a lot of what is being discussed around the new networks sounds a lot like the vernacular and themes from old.  It turns out that user- generated celebrity is bigger than mass media celebrities.  In fact, an interesting survey reported by Variety shows that U.S. teenagers are more excited with YouTube stars than the biggest celebrities in film, TV, and music.  I learned first hand from my 10-year old son that PewDiePie is way more interesting than anything else in traditional media.

It just goes to show that the Internet and its infinite amount of over-the-top, borderless signals are really changing the landscape of what we call celebrity. I hate to tell you that we told you so at AtomFilms (but, we really did tell you so).  Now, as the rise of the self-generated star has clearly broken through the noise, so has a bevy of networks that have propped up to build scale around these 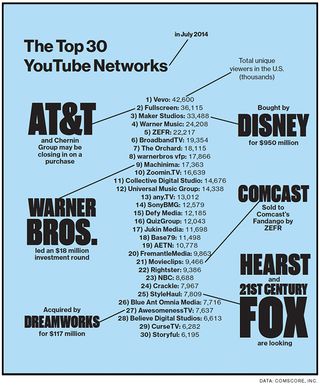 homegrown celebrities.  BusinessWeek does a good job of framing this story in their post here.

With the development of these new networks on the back of YouTube, I think the big question is how these multi-channel networks (MCNs) will take their scale and razor slim margins and turn it into real margins.  Today, the revenue is split among YouTube, the MCN, and the talent.  If history is a lesson in sponsorships, big media deals (MCN is the incubator for big screen talent), merchandise, and e-commerce will have to develop to make the big dollars.  While the talent has become widely known to younger audiences, the dollars have not caught up to the MCN’s massive eyeball scale.  For now, we shall wait and see.