The Bull Case For eSports

After watching the Winter Olympics and seeing some sports that I would not necessarily consider sports. Ahem, curling anyone? It got me thinking about my time spent on eSports last summer.

That project and company are well underway and it was truly thrilling to dig deep into this market. I won't divulge anything that is still in stealth mode. However, the team and I learned a ton and the idea received some initial funding.

There is a ton of great data that is publicly available on eSports. This isn't that kind of post. I would simply be re-packaging and/or reiterating on other folks' research. If you want a quick overview from an ecosystem and market map perspective, here is a post that will give you a good cursory overview of the eSports ecosystem.

Here are some key takeaways that were not so obvious to me about the space:

1. eSports have become the second most watched live sport in the world. In just six years. Checkout this graph: 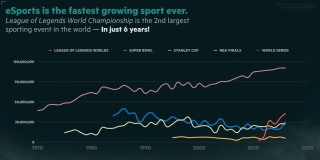 Sure, someone will jump this thread and debate concurrent v. on-demand streams, etc. It's a damn big market. Well, including soccer it might be #3 in the world but it’s still a fast growing market.

2. Vertical integration and ownership: Everyone has read about the development of eSports. In particular, how the game publishers themselves have increasingly moved away from eSports as a loss leader (events, broadcasts, etc) to building brands, to building sports franchises. Riot and Activision Blizzard have notably become the most aggressive in this area with the development of a league structure that mirrors the traditional sports world. It's very clear that the winners in this space are the games publishers. As Bill Gates famously said so many years ago: "content is king."

In eSports, the games publishers literally own the sport.Thus, they are in the vertically integrated position to dictate leagues, tournaments, broadcast rights, etc. It's literally unique in that a set of entities usually contribute to a sports league (e.g, NFL, NBA, etc) but in eSports the game, publishers own their sport.

3. Many-to-many opportunities for new pastimes: What's also unique is that new types of 'sports' can develop in a many:many relationship. Specifically, game publishers can –and do have– multiple sports. Unlike traditional sports, owners and leagues are aligned around one sport. This is not true in eSports. For example, Riot=League of Legends, Activision.Blizzard=Overwatch, Hearthstone), Valve (DOTA,
CS:G0.

4. eSports hits have long shelf lives: I have done games before in previous lives. It's a hard, fickle, and almost horrible business that relies on building (or publishing) hits. Some interesting things about eSports v. the gaming market (console, mobile, etc):
Long shelf-life: the larger brands have been around for 5-10 years. New entrants can happen – Psynoix developed Rocket League (FIFA meets monster trucks).

It would be like my Seahawks being able to have a soccer and basketball team in addition to football.

This sport is still in its infancy. So what is it going to take to be a bigger mass medium?

1. League and player development
Fans already care about the games, teams, and players. Just like any traditional fans. However, the lifespan for eSports players is really short – like several years. It makes an NFL Running Back’s career look long. Player development and player marketing has got to get better. Activision Blizzard's OverWatch is trying to build some of this thru their league structure (local teams, player strat, etc). That should help.

2. Gamers are nasty!
Sure, they look nerdy and harmless in a match. But when you watch them stream on Twitch it’s like listening to a teenager with turrets syndrome. Its natural. Gaming is deeply engaging as a player and when you have imbued your persona into a digital character in a melee, you have transference. You get [email protected]$$! pissed if someone is playing well on your team, you get killed, etc. All of us gamers understand this but this will be a key issue to resolve before major brands deploy big add dollars. The sport in general needs a Tiger Woods, Michael Jordan, or heck, a Conor McGregor. I don't know how you solve for this since gamers will always trash talk and individual streaming is never going away.

3. Huge fan base, but, no place for fans
Traditional sports has a ton of apps and sites for fans. Sports fans are engagement honey badgers. All of the efforts out there are either non-endemic (built by people who don't get eSports) or are pet projects. Sure, there are some exceptions but the amount of innovation that you could do for the fans has a ton of potentials. That is what the team at Taunt is looking to do.

But there is no place for fans outside of playing actual games and watching streamers or live broadcasts. Reddit and Twitter are the most important places for gamers to interact around the game. Twitch has some fan engagement but their Twitch chat is really supportive of hyperkinetic memes and jokes.

4. Better broadcasts
If you are a casual fan trying to watch an eSports game, you are going to be completely confused. One can argue that it doesn't matter since the audience largely plays and watches, but, in order for eSports to go to the next level, I would argue that it needs to consider ways to on-board and represent a particular game in a way that is easy for non-players to understand. Some games are just unwatchable. I love player Overwatch but I hate watching it.

I don't play League but I like to watch it, mainly because of some reasons from a game mechanic perspective (5×5 MOBAs are easier to watch). Thinking about a newbie fan broadcast experience would help to open up the sport.