Last night, I did the first ever Startup Whisperer Summit.  I haven’t really dug back into the Seattle tech scene since I moved back over a year ago.
There were many new and familiar faces at the event.

Some highlights:
Pitchbook – they hosted us in their beautiful space in downtown Seattle.  Complete with 4 beers on tap and an incredible staff that took care of our every need.  Plus, we were treated with an in-depth briefing from Pitchbook analysts on the state of the venture capital market.
Mike Hilton – Mike blew us away with his honest and insightful speech.  He covered the real story of how he built a special bond with his co-founders
of Concur.  This relationship was key to ride the turbulent waves of their 20-year journey.  The culmination of their hard work was a $8.6 billion dollar
acquisition by SAP.  Mike was very vulnerable by explaining that the company almost died during the Web bubble that saw their market cap go from $1 billion to $8 million in two years.  His story about what it took to keep the company alive was inspiring to all in attendance. 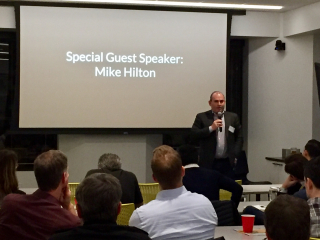 Mastermind(s) – the group sessions were a real hit.  It was fun to pair up different personality types to solve their business problems.
All of this was packed into 3 hours on a Thursday night.  It was a hit and the event score a 90 Net Promoter Score (NPS).  I am personally very inspired
by everyone in attendance.